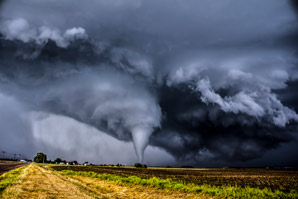 Unusual ocean temperatures in the Atlantic and Pacific can turbocharge April tornadoes across the United States.

The number of tornados across the plains of North America can vary greatly from year to year. This variability has been linked to abnormalities in the sea surface temperature, but reasons for this relationship were unclear.

To investigate how seasonal differences in the sea surface temperature affect the number of tornados, three researchers from the Institute for Basic Science swept up six decades of US tornado data and used atmospheric models.

The trio discovered that the sea surface temperature plays a significant role in April only when a strong pressure gradient arises between a particularly cool Pacific Ocean and unusually warm seas in the Gulf of Mexico. This drives moist air over the Southern Great Plains, leading to stronger thunderstorms and more tornadoes.