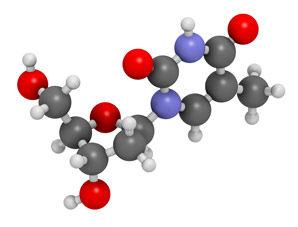 Three-dimensional (3D) nanostructures made from DNA molecules can be reinforced at weak spots in the build, using a versatile method developed by researchers at the Technical University of Munich.

DNA can used as a nanoscale building material by exploiting the fact that DNA strands with complementary sequences like to pair up, a process called Watson–Crick base pairing. Through careful sequence design, DNA molecules can be programmed to self-assemble into complex predetermined 3D shapes. However, the relatively weak hydrogen bonds involved in Watson–Crick paring have limited the uses of DNA nanostructures, which become unstable above 50 degrees Celsius, for example.

The researchers have exploited the fact that thymidine bases in close proximity will form strong covalent bonds between each other when exposed to ultraviolet light. By designing DNA strands to have neighbouring thymidine bases at weak points in the build — at joins between strands, for example — the structure was strengthened significantly, remaining stable up to 90 degrees Celsius.