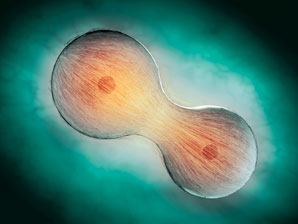 Probing a protein’s role in cell division has highlighted the importance of integrity in the nucleus.

The nucleolus is a crucial component in the cell nucleus as it generates ribosomes — the cell’s protein factories. In healthy cells, nucleoli disassemble and reassemble during cell division (mitosis), but the process can be disrupted by stresses such as DNA damage and oxygen deprivation.

Since the role that the nucleolar protein NOL11 plays in mitosis was unknown, researchers at the University of Tsukuba decided to study it. They found that depleting NOL11 caused the nucleolus to disassemble during the DNA-copying stage, before mitosis. This untimely interruption prevented an essential enzyme, Cdk1, from playing its role in cell division, and so delayed mitosis.

This works shows that maintaining nucleolar integrity during interphase is essential for the correct timing of cell division.