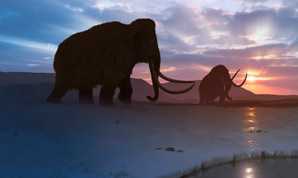 Hunting by humans played a bigger role in the demise of the woolly mammoth than previously thought, a long-range analysis suggests.

Woolly mammoths faced two major threats: habitat loss because of a warming global climate and hunting by humans. A popular theory is that climate change had the biggest impact and that humans were merely the straw that broke the mammoth’s back.

Now, a team led by researchers from the University of Adelaide in Australia has shown that humans may have brought forward the eradication of the woolly mammoth by up to 4,000 years in some regions.

Rather than just focus of the final stages of extinction, the analysis went back to the early decline of mammoths and traced a 20,000-year pathway to extinction. It involved computer models, fossils and mammoth DNA.

The study emphases the long road to an extinction of a species and the complex ways that contributing factors interact.