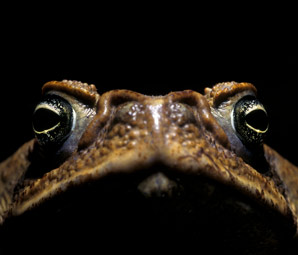 In the evolutionary arms race between cane toads and parasitic lungworms, slimy skin secretions offer a valuable weapon both for host and parasite. Which one gets the upper hand, however, depends on the geographic region of the conflict.

Researchers from the University of La Laguna and elsewhere experimentally infected cane toads from different locations in Australia with lungworm parasites, while manipulating the amount of skin secretions (which contain substances produced by the toads and their commensal microbes alike).

They showed that, in the toads’ main habitat, lungworm larvae used the skin secretions to find new hosts and then cloak themselves from the amphibians’ immune system.

Yet, at the toads’ invasion front, the skin secretions served more as a protective barrier to reduce the infection success of lungworm parasites.