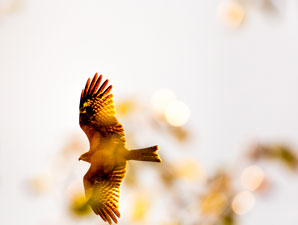 Variation in light can explain how a species evolves subgroups with different colours, a condition known as polymorphism.

Despite their name, black sparrowhawks are not completely black. In South Africa, black sparrowhawks in the Western Cape tend to have dark feathers on their underside, while those in the northeast usually have light feathers. This variation may result from geographic differences in light levels during the sparrowhawks’ breeding season affecting their visibility to prey.

To test this hypothesis, researchers at the University of Cape Town filmed sparrowhawk nests during the breeding season to measure how much prey the males brought home. Dark birds fared better in the wet winters of the Cape, where clouds and vegetation reduced light levels, while lighter birds brought home more prey in the dry, bright northeast. These findings demonstrate how lighting conditions can affect the fitness and evolution of different subgroups.