A GDSL Esterase/Lipase Catalyzes the Esterification of Lutein in Bread Wheat. 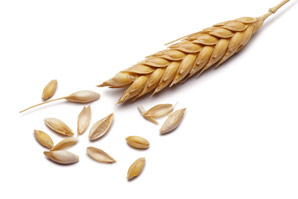 The gene responsible for increasing the longevity of an important nutrient in bread wheat has been identified. This gene could be used to improve the nutritional value of different wheat varieties and other crops.

The nutrient, lutein, is a carotenoid with roles in cognitive health. Carotenoids are responsible for the bright colours of many fruits and vegetables and are also important micronutrients, but they degrade during post-harvest storage. The degradation can be delayed by esterification, a chemical reaction which increases carotenoid stability.

Researchers at the University of Adelaide in South Australia have identified a gene in bread wheat responsible for esterifying lutein in the grain.

Surprisingly, the enzyme encoded by the gene accumulates outside the cell rather than in the compartments containing lutein and other carotenoids. The team hypothesizes that this separation controls the timing of esterification, ensuring that it occurs only once the cells die as the grain matures.