Solving the Paradox of the Solar Sodium D1 Line Polarization 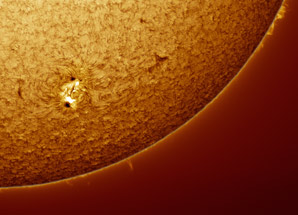 A two-decade-long mystery as to why a line in the Sun’s spectrum is polarized when theory says it’s not possible has finally been resolved.

Measurements made in 1996 revealed that a line in the solar spectrum due to the chemical element sodium was polarized, with its electric field tending to be aligned in one direction. However, theory said that it shouldn’t be polarized.

Over the ensuing two decades many creative suggestions have been proposed for this disconnect between observations and theory, but all were problematic.

Now, two physicists led by a researcher from the University of La Laguna in Tenerife, Spain, have solved the problem.

They showed that the polarization signals can be explained by accounting for previously neglected interactions using a recently developed theory of how atoms and light interact. Using this model, the trio were able to obtain good agreement with measurements.