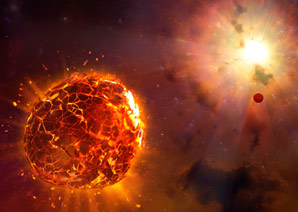 An analysis of deep-sea sediments has found strong evidence that a supernova exploded near the Earth some 2.5 million years ago.

Stars that are at least five times more massive than our Sun end their lives abruptly in huge explosions known as supernovas, which release tremendous amounts of energy and material.

Now, a team of six researchers at the Technical University of Munich and a collaborator has found that the concentration of the isotope manganese-53 in deep-sea sediments has a peak at about 2.5 million years ago. This, plus a previously found peak at around the same time in the concentration of iron-60, points to a supernova explosion at that time, which was close enough to deposit the two isotopes on the Earth’s surface.

Intriguingly, this time coincides with the end of end of the Pliocene epoch, which was attended by cooling and mass extinctions. If the supernova was close enough to Earth, it could conceivably have influenced the Earth’s climate.