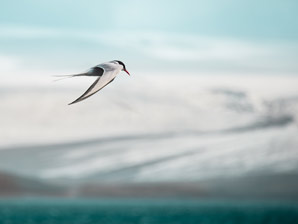 Coasts are undergoing unprecedented change due to the installation of artificial structures such as tidal power plants. But little is known about how such structures affect wildlife such as seabirds.

Now, a team that included scientists from Queen’s University Belfast has found that terns take their cues from the swirling patterns of the turbulent wake of a tidal turbine pole.

They researchers conjecture that vortices bring prey to the surface and disorient them, making them easier pickings for terns.