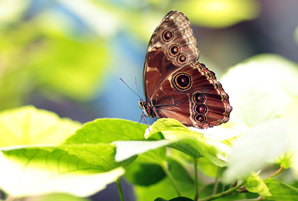 Butterflies may have evolved fewer spots on their forewings than their hindwings to avoid predators attacking the wings they need most for flight.

A common feature of butterfly wings, eyespots are believed to either intimidate predators or deflect their attacks towards less vital parts of the body. Butterflies tend to have more eyespots on their hindwings than their forewings, but it wasn’t clear why.

Now, six researchers from the National University of Singapore have compared how squinting bush brown butterflies with two or four eyespots on their forewings fared with predation by praying mantises.

They found the butterflies with four eyespots had more predator damage to their forewings, laid fewer eggs and didn’t live as long, suggesting a lower number of eyespots may reduce attacks and damage to those vital features.