Predators, prey or temperature? Mechanisms driving niche use of a foundation plant species by specialist lizards. 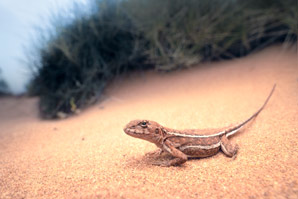 Spiky spinifex grass may help lizards cool off in the Australian outback.

Foundation species, such as grasses and coral, support diverse ecosystems by providing food, shelter or a preferable microclimate. Many Australian lizards have a preference for spinifex, a spiky grass, but it was unclear what benefit the plant conveys.

A team that included researchers from Deakin University put two species of lizards in three identical enclosures containing dead and alive spinifex, a similarly spiky plant, and bare ground. They then monitored the lizards’ movements over 18 days.

Food availability and predators were the same between sites, but temperatures were a few degrees cooler in the spinifex than over bare ground. Both species spent the most time on bare ground, but they preferred spinifex at warmer temperatures, suggesting they sought a respite from the heat.

Understanding what draws species to niche habitats is important for predicting their response to land use or climate change.