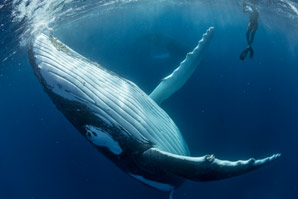 Pods of beaked whales maintain a tight formation to protect against predators when diving to depths for food and ascending to the surface, but fan out during foraging to avoid competing for the same prey.

Animals that use sound to locate prey and hunt in groups face a trade-off between staying close enough to reduce the risk of predation, and risking interference of their echolocation signals and competition within the group.

Now, a team led by researchers from the University of La Laguna in Spain has found that the deep-diving Blainville’s and Cuvier’s beaked whales balance these competing needs. They remain close using their echolocation signals while diving and ascending, but move apart—while still remaining in contact and heading in the same direction—when foraging.

The researchers found little competition between group members or eavesdropping on each other’s echolocation while hunting for prey.