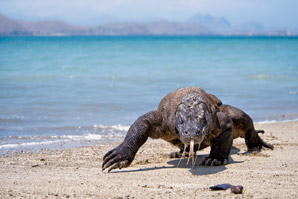 The seemingly formidable Komodo dragon may lack the courage to leave home.

Komodo dragons are the world’s biggest and most fearsome lizard, capable of devouring anything from deer to other dragons, yet their territories remain remarkably restricted.

A team that included researchers from Deakin University used GPS trackers to study Komodo movements on four Indonesian islands and found that they rarely ventured away from their birthplace. When the researchers moved several dragons many miles from their home, the gigantic reptiles all meandered back within a few months. However, dragons relocated to a neighbouring island did not attempt the return crossing, despite being strong swimmers. Dragon size differed distinctly between the islands, suggesting that adaptations to their environment would make moving home riskier.

This reluctance to roam has led to interbreeding, which could threaten the species as climate change and rising seas shrink their stomping grounds.