Tip-dating and homoplasy: reconciling the shallow molecular divergences of modern gharials with their long fossil record 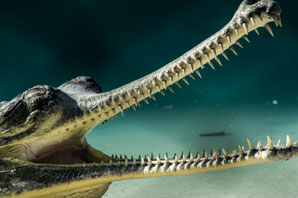 An ancient reptile has found its rightful place on the family tree, far from a fish-eating crocodile it so closely resembles.

The thoracosaur — a dinosaur-era reptile — and the Indian gharial Gavialis — a more modern crocodile species — both have long, thin snouts for catching fish, and were widely thought to be related. However, the 30-million-year gap between them remained a puzzle.

A team led by researchers from Flinders University analysed the DNA, anatomical features and age of 25 living and 93 fossilized crocodiles to place them on the evolutionary tree. The combined molecular and morphological analysis revealed that thoracosaurs and gharials are not related, but evolved similar adaptations for eating fish.

Taking into account the age of fossils, not just their shape, can help pinpoint when species diverged and similar characteristics evolved independently.