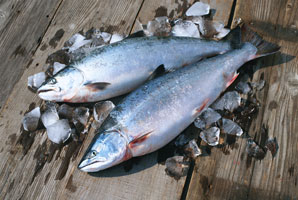 In the evolutionary struggle between salmon and gill-infecting parasites, a defensive strategy adopted by large and strong fish may actually be helping the parasite do more damage.

A team led by Hokkaido University researchers captured and tagged more than 200 masu salmon from a small tributary to the Chitose River in Japan. Before releasing the shoal, they infected half the salmon with mussel larvae that form cysts in the fish gills.

Fifty days later, the researchers recaptured the tagged fish and found that the large, strong salmon had responded to the parasitic infection by traveling greater distances — presumably to get away from further contagion — while the smaller salmon tended to preserve their energy and stay closer to home.

As computer simulations showed, however, the larger fishes’ defensive strategy backfired: it simply helped the mussel population persist longer and spread further than if the fish had stayed put.