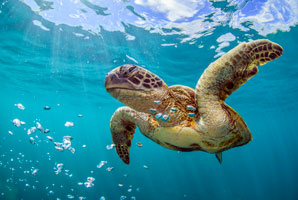 In some species, ratios of male to female embryos vary with changing temperatures, raising concerns they could become extinct due to global warming. Now, Graeme Hays at Deakin University and colleagues in Australia, Greece and the UK demonstrate that in the case of the sea turtle these concerns are unfounded, but may become relevant under extreme climate warming scenarios.

The team incorporated data on sea turtle embryo and hatchling sex ratios from 75 nesting sites, in addition to population sizes, into a mathematical model to predict how they were affected by changing temperatures.