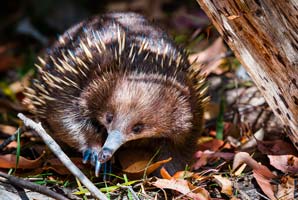 Echidnas survive burns by reducing their body temperature and increasing dormant periods, adaptations that could explain how our early mammalian ancestors made it through the fires caused by the catastrophic meteor that killed off the dinosaurs.

An Australian team, led by Curtin University’s Julia Nowack, created a controlled fire in a patch of the woodland habitat of the short-beaked echidna, a type of egg-laying animal sometimes referred to as a “living fossil” because it’s thought to closely resemble the common ancestor of all mammals. Echidnas survived the fire by taking shelter and entering an inactive state known as torpor. They lowered their body temperatures and reducing foraging activity for weeks after the blaze.

In addition to showing how echidnas can withstand seasonal wildfires and other environmental disturbances, the findings support the idea that energy-conserving torpor allowed ancestral mammals to survive the extinction event that occurred some 66 million years ago.