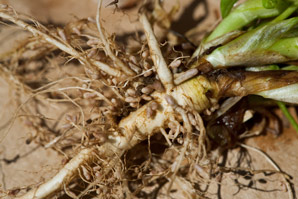 Legumes control the development of specialized root organs through the interplay of regulatory proteins whose activity depends on nitrogen levels in the soil, a finding that could inform efforts to improve nitrogen-use efficiency among crop plants.

Plants of the legume family can thrive in nitrogen-deficient soils thanks to a symbiotic relationship with nitrogen-fixing bacteria. Producing the specialized root nodules needed to house those bacteria can be energetically costly. So plants have developed molecular mechanisms for tightly regulating nodule formation to ensure they don’t needlessly make the root organs under nitrogen-rich conditions.

Now, a team led by University of Tsukuba researchers has identified two regulatory proteins in the wild legume Lotus japonicus that help to turn on genes involved in shutting down nodule formation in nitrogen-rich soils.

They found that one of these proteins also physically interacts with a different ‘pro-nodule’ regulatory protein to reduce the expression of genes that would otherwise induce nodulation.