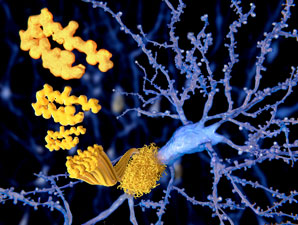 Wollongong University’s Heath Ecroyd and a team of Australian and UK scientists found that Hsp27 caps the ends of polymeric α-synuclein fibrils, preventing attachment of additional monomers, and that it binds to the surface of fibrils, reducing their ability to aggregate.

The team also found that Hsp27 binding reduced the cellular toxicity of α-synuclein fibrils, as evidenced by a reduction in reactive oxygen species — damaging, chemically reactive molecules that are implicated in neuronal toxicity.

During testing, Hsp27’s protective abilities failed when there was an overabundance of α-synuclein fibril ‘seeds’. This is an important finding since duplication or triplication of the gene encoding α-synuclein is associated with early onset Parkinson’s disease.

The mechanisms of Hsp27 may represent shared methods of heat shock protein action that may inform the development of future anti-neurodegenerative therapies.