Role of salt bridges in the dimer interface of 14-3-3ζ in dimer dynamics, N-terminal α-helical order and molecular chaperone activity 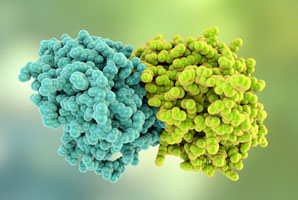 A new study reveals how members of the 14-3-3 protein family chaperone their target proteins, including those linked with Alzheimer’s and Parkinson’s, such as tau proteins.

14-3-3 proteins become pairs to form dimers which are thought to be stabilized by salt bridges between sites in the two proteins. To understand the importance of these salt bridges, a team including researchers at the University of South Australia engineered a 14-3-3 protein in which the salt bridge-forming sites had been mutated.