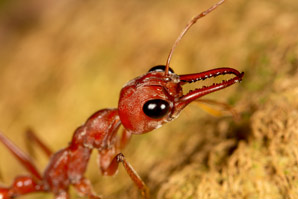 A component in the venom of the Australian giant red bull ant mimics a hormone found in mammals and makes them more sensitive to pain, a finding which could be useful for developing new ways to treat long-term pain in people

Most animal venoms are made up of a cocktail of toxins that induce a variety of reactions in their victims.

Now, a team led by researchers from the University of Queensland in Australia has found that a peptide toxin in the bull ant’s venom closely resembles an epidermal growth factor hormone found in mammals.

Unlike other toxins in the ant’s venom that impart a stinging sensation, the hormone-mimicking toxin does not directly cause pain in mammals. Rather, it enhances their long-term sensitivity to pain.

The researchers speculate the ant evolved the venom to defend against echidnas — the only mammal known to attack nests of bull ants.