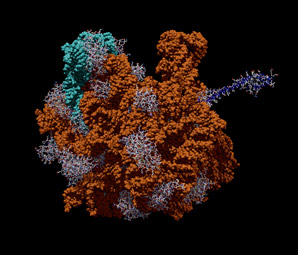 Ribosomes — the protein factories of the cell — use an octopus-like appendage to recruit the molecules they need to make proteins.

The ribosome is one of the best-characterized protein complexes in biology, but researchers have mostly taken static snapshots of the structure.

The team focused on one component of the ribosome called the P-stalk, a flexible, six-part structure with tentacle-like arms that helps recruit molecules needed for protein production.

The movies revealed how the P-stalk latches onto two so-called elongation factors — one involved in bringing protein building blocks to the ribosome, the other in moving protein synthesis along. In this way, the bendy P-stalk maintains a concentrated, localized pool of these factors for efficient ribosome function.