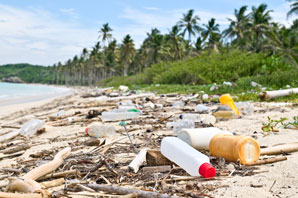 Rubbish washing up on an uninhabited island in the Atlantic is mainly plastic bottles dumped at sea by cargo ships from Asia.

A team that included researchers from the University of Cape Town surveyed the mountains of litter on Inaccessible Island in the South Atlantic Ocean in the 1980s and again in 2009 and 2018, noting the country of origin for thousands of items. Their analysis revealed that the main source of waste has shifted from South America to Asia — by 2018, three quarters of all plastic bottles that washed up were made in Asia (mainly China).

The recent manufacturing dates on many bottles suggest they did not drift from the mainland, and were most likely dumped from Asian cargo ships.