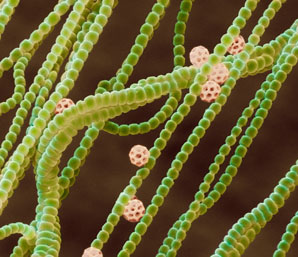 A species of cyanobacterium has a worldwide distribution and significantly fewer genes than its close relatives, whole-genome sequencing has revealed.

Photosynthetic cyanobacteria survive in a wide range of marine environments. While much research has been done on their free-living form, little is known about those co-existing in a symbiotic relationship with other organisms.

Now, DNA investigations by researchers at the University of Tsukuba and colleagues in Japan have improved our knowledge of a poorly described cyanobacterium, dubbed OmCyn, which lives within a species of marine plankton.

Their analyses revealed OmCyn DNA is widely found in the world’s oceans. Also, its genome contains significantly fewer genes than most of its relatives, probably because of its residence within the relatively mild and stable environment of its symbiotic partner.

These findings provide crucial insights into cyanobacteria diversity and evolution, and suggest that other symbiotic cyanobacteria lineages may be waiting to be discovered.