Geoarchaeological evidence from Angkor, Cambodia, reveals a gradual decline rather than a catastrophic 15th-century collapse 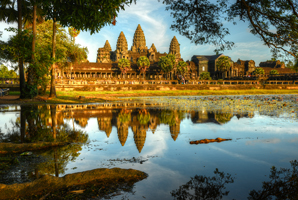 The abandonment of the ancient Cambodian city of Angkor was not as abrupt as previously thought.

Historians have speculated that Angkor suffered a catastrophic collapse in the 15th century as a result of a foreign invasion or infrastructure failures, but evidence remains ambiguous.

Now, a team that included researchers from Flinders University have analysed the mineral content of sediment cores from beneath the moat surrounding Angkor’s old urban centre to determine how land use changed over time. They found that signs of disturbance, such as soil erosion and biomass burning, began declining 100 years before the supposed collapse, and that by the end of the 14th century, the moat was already swamped with vegetation, suggesting all management had ceased.

Angkor’s early elite may have been drawn away by new opportunities elsewhere, leaving the capital to fall into decline before the foreign invaders arrived.