Trilobite evolutionary rates constrain the duration of the Cambrian explosion 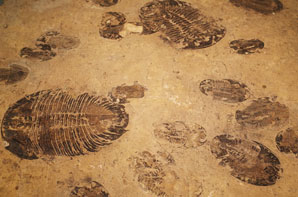 The sudden burst of animal evolution about 540 million years ago may have ended as quickly as it began.

Microbial life emerged on Earth 3.5 billion years ago, but it wasn’t until the Cambrian Period, three billion years later, that modern animals burst onto the scene. Fossil records record the starting point, but it is not known how long this flurry of evolutionary innovation lasted.

A team that included researchers from Flinders University analysed the dense fossil record of trilobites — oceanic arthropods that were the most abundant and diverse Cambrian creatures — to calculate their rate of evolution during this time. They found that the accelerated evolution settled to normal levels by at least 520 million years ago, and suggest that a modern marine biosphere had established itself in just 20 million years.

The sudden and swift emergence of such diversity highlights life’s impressive ability to rebound rapidly from disruptions, as seen after mass extinctions.