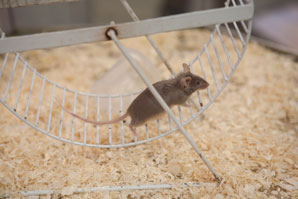 Mild exercise and antioxidants both work through an appetite hormone to improve brain health, according to a study in mice.

A University of Tsukuba–led team showed that low-intensity exercise on a treadmill combined with an antioxidant-supplemented diet enhanced spatial memory and neuron formation in healthy mice. But these effects were not observed in obese mice having mutations in the gene responsible for the production of leptin, a hormone involved in feelings of satiety.

The interventions, separately and together, boosted expression of leptin in the brain’s hippocampus to bring about the benefits on brain function.

Direct infusions of leptin into the brain’s main cavities had the same effect, highlighting the potential for both pharmacological and lifestyle strategies to modulate leptin activity and prevent cognitive decline in people with Alzheimer’s disease and other neurodegenerative disorders.