When did Homo sapiens first reach Southeast Asia and Sahul? 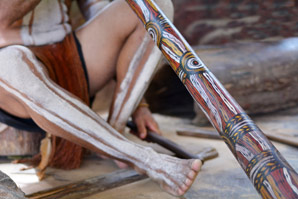 The arrival of modern humans to Australia should be brought forward 15,000 years, a review of existing evidence finds.

Modern humans (Homo sapiens) wended their way out of Africa into Europe between 50 and 55 thousand years ago (kya), but some studies suggest an earlier eastward spread, with H. sapiens landing in Australia 65 kya.

Now, a team that included researchers from the University of Adelaide has reviewed all studies dating H. sapiens remains and artefacts from sites around Southeast Asia and northern Australia, including the now disputed 65 kya Madjedbebe site. The researchers found that most evidence supports the 55 kya arrival in the region, but suggest that the Madjedbebe date is an anomaly caused by the artefacts sinking into older layers of sand.

Accurate dating and genetic analysis of the fossil record itself, which is often too fragmented to identify species by bone shape alone, would provide more precise answers than the dating of tools and sediments.