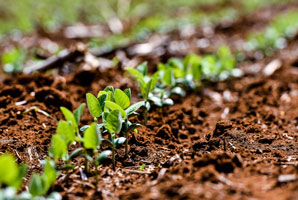 Countries that import soybeans, instead of growing them for domestic consumption or export, risk increased pollution if they convert existing soybean farms to grow fertiliser-hungry crops.

It is generally accepted that food exporting countries are burdened with the environmental degradation associated with intensive farming, while importing countries reap all the benefits. A team including researchers from the Chinese Academy of Agricultural Sciences examined global data on nitrogen emissions from farming soybeans, wheat, corn, rice, and vegetables.

They found that soybean farmland absorbs nitrogen, whereas the other crops use fertilizer less efficiently, leading to its overuse and accompanying nitrogen pollution, which can damage river ecosystems and water supplies. In China, the world’s largest soybean importer, a shift from growing soybean crops to corn and rice increased nitrogen emissions by nearly 125,000 tons between 2010 and 2014.

This highlights the need to re-evaluate the impacts of international trade on importing countries in order to achieve global goals of sustainably increasing food security, while protecting the environment.