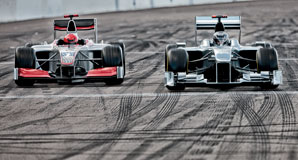 Competition is more likely to escalate into conflict between two people of similar status, an international research team finds.

Wonjae Lee of the Korea Advanced Institute of Science and Technology, and colleagues, gathered data on Formula One races between 1970 and 2014 to construct a social network graph formed of nodes representing individual drivers, and connecting lines that represent joint competition in at least one race. A statistical approach was applied to predict the probability of a collision happening between two drivers based on age, points scored, the stability of starting positions over the course of a season, and weather conditions. They found that, providing weather conditions were safe, drivers who were ‘status-similar’ — in terms of age and performance — were more prone to collide.

The study provides a measurable approach for studying the conditions that make conflict escalation more likely, and could inform efforts to ease conflict.