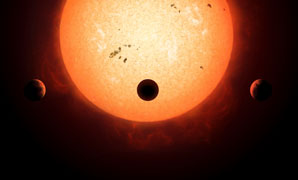 Joint observations with NASA’s Kepler satellite and China’s LAMOST telescope could tell us how planets outside our solar system are formed.

A team, including a Peking University researcher, has discovered a sample population of hot Neptune-sized planets, also known as ‘Hoptunes’, that share similar characteristics with ‘hot jupiters’ and are located very close to their sun-like star.

Both types of exoplanets were found around stars with a higher content of elements other than hydrogen and helium than the Sun, and form close to their central star – in the case of hoptunes, orbiting in fewer than 10 days.

They also prefer to form in ‘single-transiting’ planetary systems where only one planet temporarily blocks light from its star when it passes an external view. This allows astronomers to gain vital information about the planet’s atmosphere, surface temperatures and size. The team also discovered that hot jupiters and hoptunes are separated by a Saturn-sized ’valley’.

The similarities between these exoplanets could help explain the unique conditions it takes to form them.