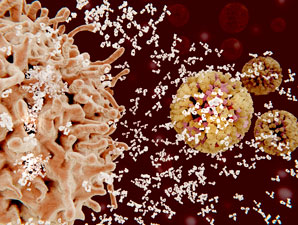 A molecular switch involved in tuning the immune response to defend against pathogens within or outside cells also influences susceptibility to two major tropical diseases, cutaneous leishmaniasis and schistosomiasis.

Studies have shown leishmaniasis resistance and increased schistosomiasis sensitivity in mice lacking mature B cells, immune cells which produce signalling molecules known as cytokines. To investigate the basis of this change in susceptibility, researchers at the University of Cape Town engineered mice with B cells that lacked the receptor for the cytokine IL-4, IL-4α. These mice were protected from leishmaniasis, but were more sensitive to schistosomiasis.

These findings show that an early-acting switch in B cells determines the type of immune response, which can modulate resistance or susceptibility to different diseases.