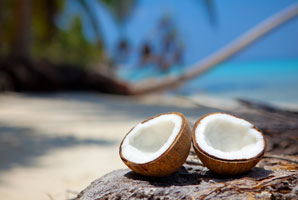 Parasites that stop coconut beetles reproducing could be used in the battle against a critter that is killing coconut trees.

Bacterial parasites ensure their survival by altering their host’s reproductive abilities, often by making the females fitter. The only bacteria reported to cause ‘cytoplasmic incompatibility’ in their insect hosts, which limits the chance of offspring if infected males mate with uninfected females, were Wolbachia and Cardinium — until now.

A team led by researchers from Kyushu University have found a third, unnamed, parasite that is closely related to but genetically distinct from Wolbachia, in coconut beetles — a pest that is killing coconut trees. The team found that the parasite prevents cross-species reproduction between Pacific and Asian coconut beetles.

Previously, releasing male insects carrying Wolbachia or Cardinium among uninfected populations of spider mites and wasps reduced the number of offspring, suggesting that the newly identified parasite could be used to control coconut beetles.