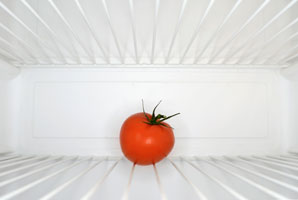 Cold storage may extend the shelf-life of tomatoes, but it drains the fruit of all its earthy, off-the-vine flavours — and a new study involving researchers from Zhejiang University explains why.

According to a US-China investigation, the flavour compounds that waft into the air and carry the fruit’s distinctive aroma break down at low temperatures because the genes responsible for making these volatile chemicals switch off when a tomato’s environment drops below 12 degrees Celsius. However, the production of sugars and acids remain unchanged by chilling.

Take the tomatoes out of the refrigerator, and some of these volatile-synthesizing genes jump back into action. But many others remain irreversibly silent due to an epigenetic process in which chemical tags get added to the DNA, resulting in dampened gene expression.