Spiny plants, mammal browsers, and the origin of African savannas 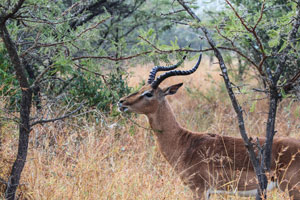 The habits of antelopes and other leaf-eating mammals are at least partly responsible for the creation of Africa’s grassy plains some 16 million years ago.

Researchers from the University of Cape Town traced the evolution of more than 1,800 thorny tree species from across Africa. They found that spiny plants emerged on the continent’s savannahs around the same time as ruminant herbivores, suggesting that the spines were an adaptation to prevent being munched.

These changes all happened around the same time that the ancient forests were replaced by tree-dotted grassland, well before the fires and atmospheric changes long thought to have helped create the savannahs.

These findings have revived questions surrounding human impact on antelope populations. If those grazers disappear, it’s possible that the present-day savannahs could revert to thickets.