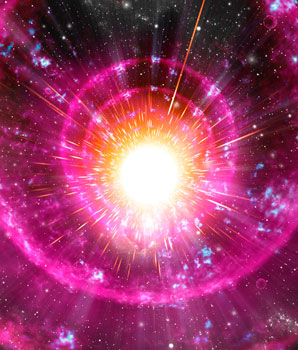 The discovery of remnants from a supernova, a massive, exploding star, point toward a cosmic event that may have influenced the evolution of life in the Earth’s oceans, according to a study published in the Proceedings of the National Academy of Sciences.

Scientists from the Technical University of Munich and colleagues in Austria and Germany, found traces of iron-60 in sediments taken from the bottom of the Pacific Ocean. Containing 34 neutrons and 26 protons, this radioactive isotope of iron is not produced on Earth, but from the aftermath of supernovae.

By counting the number of iron-60 atoms, they dated the supernova to around three million years ago, and estimated that the Earth took about 800,000 years to travel through its dust cloud.

The team has demonstrated that the supernova possibly contributed to a well-known mass extinction of marine life on Earth, as well as a period of global cooling and shrinking of the ozone layer.