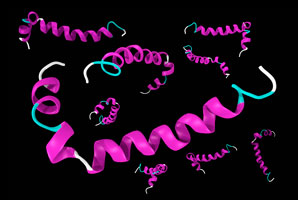 The protein amyloid beta, commonly associated with Alzheimer’s disease, has been recorded growing in real-time.

When protein threads clump around brain tissue as insoluble ‘fibrils’ they can cause neurodegenerative diseases such as Parkinson’s, Huntington’s and Alzheimer’s. Being able to see how these fibrils develop, however, has been difficult with available static imaging methods.

A team including researchers from Kanazawa University used high-speed atomic force microscopy, a rapid, high-resolution imaging technique that does not interfere with molecule activity, to directly observe amyloid beta fibrils evolving. When allowed to form freely in an experimental solution, the fibrils grew in either a straight or spiral arrangement. Surprisingly, the fibrils switched between the two structures when the solution’s salinity was altered. This counters the theory that fibrils only grow through the faithful duplication of the first protein’s nucleus.

This finding suggests that amyloid beta fibrils could be converted between their toxic and non-toxic structures by altering their microenvironment.