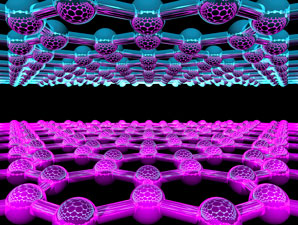 Using a layer of graphene one atom thick, to boost the magnetic properties of materials, could be the key to high-density memory and smaller, lower energy electronics.

A team led by Sichuan University researchers performed simulations of graphene’s effect on magnetic excitations known as magnetic plasmons that travel along the interfaces between materials.

These magnetic excitations are created by optical light, and are insignificant in naturally-occurring materials. However, they can be enhanced by creating artificial layered materials, called metamaterials, which contain regular nanoscopic patterns of conducting and insulating materials.

The simulations compared the magnetic response to optical light for thin layers of silicon dioxide sandwiched between a gold film and a gold grating, with and without a layer of graphene on its surface.

The graphene increased the magnetic response by up to 25 per cent, and also shifted the wavelength of the peak response. By adding charge to the graphene layer the response could be actively tuned, enabling dynamic control of future devices based on magnetic plasmons.