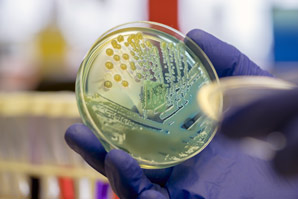 Bacteria that are resistant to commonly used antibiotics are reaching dangerously high levels worldwide. Gold nanoclusters weaponized with chemical ligands are promising way to combat such superbugs, but it has been tricky to ensure they don’t inflict collateral damage to the cells of the host.

Now, a team led by researchers at the Southern University of Science and Technology (SUSTech) in Shenzhen, China, has demonstrated a new strategy involving gold nanoclusters with two ligands.

One ligand is positively charged and consequently is attracted to bacteria cells, which are negatively charged. The other resembles compounds found in mammalian cell membranes, making it easier for the gold nanoclusters to be safely excreted via the kidneys.

By optimizing the balance of these two ligands, the team produced nanoclusters that were effective against drug-resistant bacteria without exhibiting long-term toxic effects in rats.