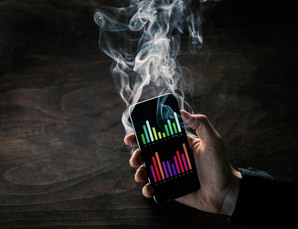 The addition of ionic liquids to conventional electrolytes in lithium-ion batteries can lead to serious safety concerns.

Lithium-ion batteries have been used to power mobile devices for three decades because they are lightweight and can store a lot of energy. But they suffer from safety concerns as they can occasionally overheat and even explode.

These problems stem from the carbonate electrolytes used in lithium-ion batteries. Ionic liquids are promising as alternative, more-stable electrolytes. Some studies have suggested that hybrid electrolytes that are a mixture of carbonates and ionic liquids may be safe.

Now, seven researchers from Vidyasirimedhi Institute of Science and Technology (VISTEC) in Rayong, Thailand, have tested the safety and performance of lithium-ion batteries with such mixed electrolytes.

They found that adding ionic liquids to carbonate-based electrolytes can produce free carbonate-based molecules that can be easily oxidized, leading to flammable gas being generated.