Chemically induced repair, adhesion, and recycling of polymers made by inverse vulcanization 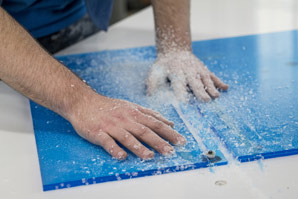 A room-temperature method for strongly bonding two polymer surfaces could lead to applications in polymer use, repair and recycling.

The molecules of conventional polymers are based on strings of carbon atoms, but some recently developed polymers are at least half sulfur by mass. As sulfur compounds typically make and break bonds more readily than their carbon counterparts, these polymers gain some unusual properties. When cut, for example, applying heat can heal the rift by forming new sulfur–sulfur bonds across the break.

As well as healing damage, the process can be used to bond two objects together, or as a way to form new objects after grinding the polymer to a powder during recycling. The team is pursuing potential applications in industrial contexts.