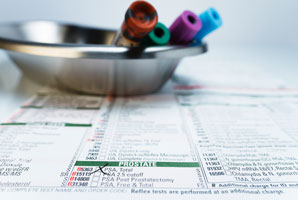 Cancer diagnosis could be quick, easy and portable thanks to DNA-filled nanopores.

Fast, cheap and early diagnosis is a major goal in cancer research. One approach uses membranes with nanometre-sized pores that pick up molecules released by the tumour. Big molecules, however, such as proteins and enzymes, can block the nanopores.

A team including researchers from the East China University of Science and Technology made a nanopore membrane containing fragments of DNA designed to attract PSA, a common molecular marker of prostate cancer, and added a filter to prevent other molecules reaching the membrane. They applied an electric current to the membrane, which was blocked when a PSA molecule entered a pore, causing a blip in the signal. The membrane could detect minuscule concentrations of PSA in blood samples within 30 minutes.

These membranes could be used in portable devices for on-the-spot testing for cancer, increasing the chance of early diagnosis.