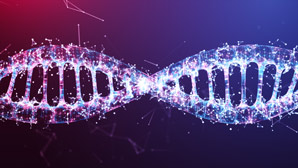 AI modelling of gene dynamics in single cells could be used to predict how individual cells will develop.

RNA velocity is the speed at which the expression of each gene in a cell is increasing or decreasing at a given moment. Conventional single-cell sequencing methods measure it only from static snapshots, limiting its use for predicting how a cell will develop.

Now, a team led by researchers at the Technical University of Munich has created an open-access AI model called scVelo to estimate the RNA velocity of dynamic biological systems.

They used machine learning methods to teach scVelo the likelihood of every possible way a gene could act at any point during a cell’s development. The team used scVelo to analyse cell development in the mouse pancreas and in regenerating human lung tissues.

scVelo could be used to study cellular responses to disease progression and cancer treatment.