How to design an icosahedral quasicrystal through directional bonding 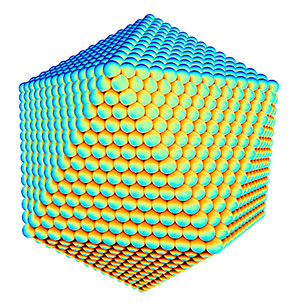 A strategy for constructing quasicrystals with a special symmetry has been devised for the first time.

Quasicrystals are curious entities. Unlike conventional crystals, they are not made up of repeating building blocks. But despite that, they do possess order when viewed on a large enough scale.

Now, two researchers at the Spanish National Research Council and two collaborators have used computer simulations to show that colloidal particles could assemble themselves into icosahedral quasicrystals through directional bonding.

The team suggest that icosahedral quasicrystals could be made in the lab by using nanotechnology techniques employing DNA origami particles.