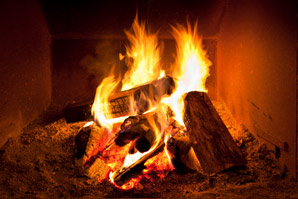 Wood burning and non-exhaust vehicle emissions are the greatest sources of oxidizing particles in air pollution.

The link between exposure to air pollution and poor health is well established. What’s less well understood is what components of air pollution do the most harm and what are the most damaging sources.

Now, a team led by researchers from the Paul Scherrer Institute has looked at air-pollution samples from five types of locations across Switzerland, including urban roadsides, rural alpine valleys and urban settings. They quantified features such as particle size and oxidative potential — the ability of the particles to cause the oxidative stress associated with inflammation.

The team found that the greatest mass of pollution particles were from sources such as soil and organic compounds released naturally. However, the greatest oxidative potential was associated with particles from human sources, particularly residential wood-burning heaters and particles released by the wear and tear on car tyres and roads.