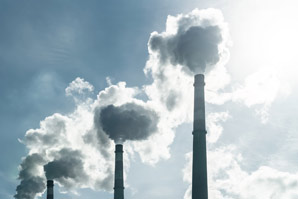 Filling some of the nanoscale pores of metal–organic framework (MOF) materials with light-absorbing titanium dioxide particles can significantly boost the MOF’s photocatalytic capabilities.

MOFs’ highly porous structures potentially make them ideal for the uptake and catalysis of small molecules, such as the absorption and photocatalytic reduction of CO2 into CO and CH4 (methane). However, MOFs are usually far less efficient than solid-state or molecular catalysts for CO2 photoreduction.

Titanium dioxide particles selectively grew in the MOF’s two larger pore types. Thanks to the interaction between the light-absorbing titanium dioxide and neighbouring chromium ions, to generate and store excited electrons, the MOF reduced CO2 to CO and CH4 with a performance comparable to solid-state and molecular catalysts.