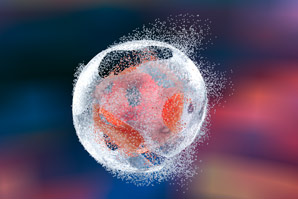 A protein known to be involved in orderly cell death, when reconfigured, can also cause cells to die through excessive swelling leading to rupture, a mouse study has found.

Caspase-8 is a protein that classically triggers a controlled cell-death process involved in normal health and development, while suppressing an immune-mediated death mechanism implicated in responses to trauma or infection.

In the absence of both those functions, however, caspase-8 can rewire itself to galvanize yet another cell-destruction pathway, one characterized by extensive inflammation.

The finding — from a series of mouse experiments conducted at Genentech, a Roche subsidiary — exposes a previously unappreciated degree of flexibility between cell-death programs.

This molecular plasticity likely evolved to help cells fight off viral invaders. But the same adaptive process may be stymying efforts to treat certain chronic inflammatory diseases with drug therapies.