Pluripotency and the origin of animal multicellularity 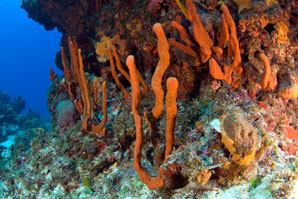 The single-celled ancestor of all animals alive today may have already possessed a stem cell–like ability to transition between different states. This scenario goes against the long-standing view that animals evolved from blobs of simpler cells.

Scientists from the University of Queensland in Australia compared gene-expression profiles between sponges — one of the earliest animal groups to evolve — and a closely related single-celled protist called a choanoflagellate.

The structural similarities between one type of sponge cell and choanoflagellates had prompted experts to conclude that animals likely evolved from bundles of these cells that then diversified to acquire complexity.

However, the researchers found little overlap in the gene-activity patterns of those sponge cells and the choanoflagellates. Instead, the gene-expression levels of the protist more closely matched those of another cell type, one that acts like a stem cell for the sponge.

The researchers concluded that these developmentally malleable cells likely gave rise to the first animals.