A late Middle Pleistocene Denisovan mandible from the Tibetan Plateau 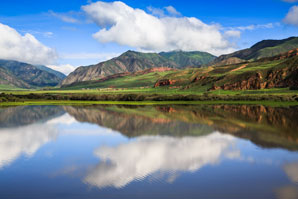 A jaw bone found on the Tibetan plateau suggests Denisovans won the hominin race to the roof of the world.

Extinct relatives of the Neanderthals, the Denisovans are known only from a handful of fossils from one cave in Siberia. However, traces of their DNA are found across East Asia today. That DNA includes a gene that helps survival in low-oxygen levels.

A team led by researchers from Lanzhou University analysed a lower jaw bone found in Baishiya cave 3,280 metres high up on the Tibetan plateau. They analysed proteins extracted from one of two remaining teeth and found they closely matched the Denisovans, while the jaw’s primitive shape and large molars reveal a relation to Neanderthals. The team dated carbonate encrusted on the fossil to around 160,000 years ago, when temperatures were much lower than today.

This indicates that Denisovans may have adapted to the high life long before Homo sapiens reached the Tibetan plateau about 40,000 years ago.